Digipower
If you want to become the next TikTok superstar and GoViral, there are some essential products you would need. From

Letters and Sciences, University of Maryland
COVID-19 Changes All students must be vaccinated for COVID-19 or have an approved exemption by August 2nd to avoid registration 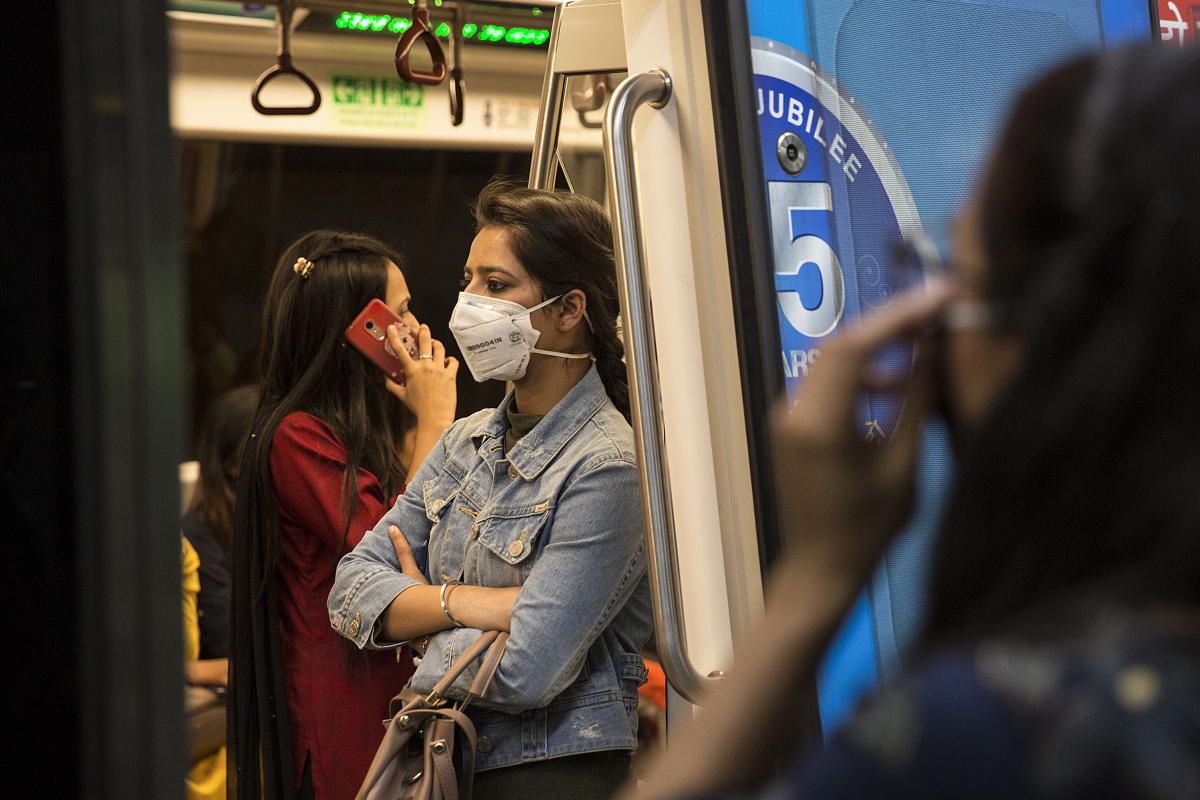 This week, the novel coronavirus pandemic, which has affected nearly 200 countries, will begin to ravage one of the biggest, most vulnerable nations in the world. India, home to more than 1.3 billion people, is bracing for a surge in COVID-19 cases. The country already has the largest cohort of people in the world living with respiratory disease, thanks primarily to its chronic air pollution and high rates of tuberculosis. Such conditions make this densely populated country the perfect fodder for a virus that attacks the lungs of its victims.

India reported its first case of COVID-19 on January 30. Over the last few weeks, cases of the disease have grown exponentially, with 519 people infected and ten deaths as of March 24. According to the World Health Organization’s Situation Reports, the virus is spreading in India through local transmission and not simply through the arrival of people who contracted the virus abroad. But until March 21, the Indian government had set fairly restrictive criteria for testing, providing tests only for international travelers and their immediate contacts. On March 24, the government imposed a three-week lockdown to slow the spread of the disease.

India’s indecisive approach to testing has obscured the extent of undetected infections within the country, making the future magnitude of the outbreak hard to predict. India is already an unhealthy nation: it has the dubious distinction of being the “diabetes capital” and “cardiac capital” of the world with 50 million people living with diabetes and 54 million living with cardiovascular disease. Its threadbare public health system and exclusionary private health system don’t provide adequate care for all Indians. The country now finds itself preparing for an uphill battle against a virus that has already overwhelmed some of the most developed health-care systems in the world.

A RECIPE FOR DISASTER

The pandemic will be especially dangerous in India. The country’s health infrastructure is woefully underfunded and unprepared for the eventual crush of COVID-19 patients. The distinctive misfortune of India’s geography—the Himalaya Mountains curtail the movement of winds across the subcontinent in a manner that worsens smog in northern India—has led to growing rates of respiratory disease. In 2018, nearly a third of the cases of chronic respiratory disease around the world were in India. The country already bears the burden of being home to the world’s largest number of people with tuberculosis (2.8 million of the global total of 10.2 million patients); those with tuberculosis are especially at risk of COVID-19. The virus may very well spark a humanitarian crisis. One estimate, using the same mathematical models applied in the United Kingdom and the United States, suggests that India could face in the area of 300 million cases before the end of July, of which about four million to five million could be severe, leading potentially to one million to two million deaths.

Panic and chaos have already set in across the country. A man hospitalized in New Delhi with COVID-19 symptoms committed suicide. A mob beat up another man in the western state of Maharashstra for sneezing in public. In the northwestern state of Punjab, officials in the town of Ludhiana have lost track of 167 people who may have contracted the virus. Quarantined people have begun running away from the unsanitary isolation wards hastily put up by authorities.

India spends one percent of GDP on health care, among the lowest rates in the world.

Many Indians don’t feel that they can rely upon the country’s medical establishment. Since independence in 1947, India has failed to invest sufficiently in health infrastructure, effectively handing over the responsibility for health care to private hospitals, which now control 74 percent of the health-care market and hold 40 percent of the nation’s hospital-bed capacity. Only about a tenth of the poorest one-fifth of Indians have access to any kind of government or private health insurance. The Indian government spends a little over one percent of GDP on health care, among the lowest rates in the world. Given relatively free rein to charge as they wish, India’s private hospitals have become notorious for priortizing profits over patients, overdiagnosing, overtreating, and overcharging those who have insurance. At underfunded government hospitals, doctors tend to underdiagnose the uninsured and offer them meager treatment.

That disparity is accentuated by a scarcity of resources. One of India’s most populous states, Maharashtra, has only 450 ventilators and 502 intensive care unit (ICU) beds in its public hospitals to meet the demands of 126 million people. Chhattisgarh, a state with a population of 32 million people, has 150 ventilators in government hospitals and perhaps only 25 specialists who know how to ventilate cases of acute respiratory distress syndrome, the kind of respiratory failure caused by COVID-19. The country lacks testing kits, protective gear for health-care workers, ventilators, and hospital beds. These deficits helped create India’s preventable epidemic of tuberculosis in recent decades, which continues to claim 1,400 lives every day, and now pave the way for a devastating coronavirus epidemic in the country. Of all the nations seriously affected so far, India is the least prepared to handle an explosion in cases.

HINDUTVA IN THE TIME OF CORONAVIRUS

Singapore is now the oft-invoked example of a country that properly contained its COVID-19 outbreak. The measures that worked in Singapore were to aggressively test people for the virus, identify and isolate cases, carefully trace the prior contacts of patients, and strictly quarantine people with suspicious symptoms.

India’s approach stands in sharp contrast. Answering criticism for its limited testing of suspected COVID-19 cases, the government broadened its testing criteria on March 21. But it insists that aggressive testing at the Singaporean scale is not realistic because of the size of India’s population. Testing aside, officials have struggled to trace the contacts of infected patients and to prevent people from fleeing isolation centers. Such measures as self-quarantine and social distancing will not be easily applied in a country where one-third of the population lives in dense, overcrowded cities.

The cultural orientation of the government of Prime Minister Narendra Modi exacerbates these problems. His Hindu nationalist administration has encouraged unscientific thinking since coming to power in 2014. Modi and his ministers hold intellectuals and experts in disdain and have set up a ministry for promoting traditional medicine, such as Ayurveda and yoga. This ministry has endorsed dubious homeopathic prophylactic treatments and undermined the efforts of the health ministry to fight misinformation and superstition. The COVID-19 pandemic hits India as it is led by ideologues who have urged the use of cow dung and urine to prevent the spread of the virus. One activist belonging to Modi’s Bharatiya Janata Party was arrested after people fell sick at a party he held in March where guests were encouraged to drink cow urine. 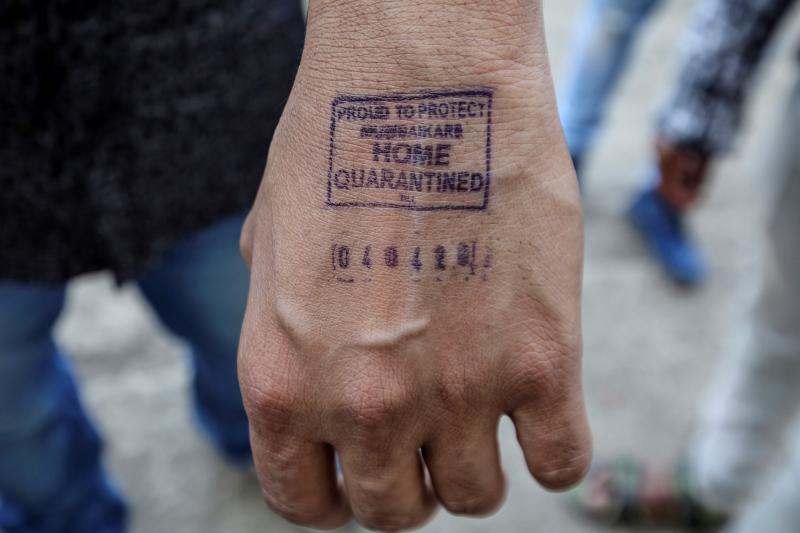 The stamped hand of a man advised to quarantine at home in Mumbai, India, March 2020

Although the prime minister has not himself extolled the virtues of cow urine as a defense against the virus, his approach to the crisis has been high on rhetoric and low on specifics. During televised remarks on March 19, Modi compared the battle against the COVID-19 pandemic to the world wars and warned of the likelihood of an exponential growth of infections in the absence of proper social distancing. But his address to the nation did not explain his government’s strategy to tackle the virus. Instead, he put the onus on citizens, calling on Indians to enter a self-imposed curfew on Sunday, March 22.

Although social distancing is necessary to contain the virus, this curfew has done little to break the chains of transmission that Modi’s government has allowed to spread unchecked since the beginning of March. Some Indians treated the curfew as the occasion to gather in festive crowds, obviating its intended purpose. Modi’s speech on March 19 ended with a request for Indians to thank their doctors, nurses, and emergency responders by imitating the singing now common in locked-down Italy and by gathering on rooftops and balconies to clap in unison.

Many health workers took to Twitter to express dismay at the vagueness of Modi’s speech. One doctor, Afreen Usman, whose husband is caring for COVID-19 patients, tweeted, “As a doctor myself and as [the] wife of a doctor who is working with coronavirus patients, let me assure you that we don’t want people clapping for us, what we really need is more testing kits, better quarantine facilities, hazmat suits, and more awareness.” Belatedly, Modi and his government swung into action, ordering a nation-wide lockdown for 21 days on March 24.

A number of local state governments have already acted decisively. The slow planning of the central government in New Delhi stands in stark contrast to the swift steps taken by state governments, especially those of the southern state of Kerala. As Modi was calling upon Indians to bang utensils and clap from their balconies, Pinarayi Vijayan, Kerala’s chief minister, announced a 200 billion rupee ($2.6 billion) financial package that includes loan waivers, free rations, pensions, and the setting up of low-cost eateries to help residents of the state endure the crisis.

According to some estimates, India has only between 70,000 and 100,000 ICU beds in the entire country across both the public and the private sectors. Health experts insist that India has until about April 10 to better prepare its hospitals, convert a few stadiums into isolation centers, and procure as many ventilators as possible. So far, Modi’s administration has not done any of these things. It has merely asked private hospitals to provide an inventory of ICU beds and ventilators, cancel nonessential surgeries, and make sure they don’t turn suspected COVID-19 patients away. The administration has, however, been quick to invoke the draconian British-era Epidemics Act of 1897, imposed during an outbreak of bubonic plague. The act gives the government sweeping powers to fine, detain, and imprison people for breaking quarantine rules, a nebulous power that could easily be misused. Historically, pandemics—and efforts to control them—have often led to measures that curtail civil liberties. Public health experts and pro-democracy activists in India are worried that the government might use the pandemic as an excuse to crack down further on dissent, which surged when protests against a controversial citizenship law erupted in December.

The epidemic curve in India is likely to follow a trajectory similar to that in Italy. A spike in cases will saturate and overwhelm India’s health system. Failing to contain the pandemic in India has global implications, as is evident in the spread of tuberculosis from the country. In 2015, U.S. health authorities confirmed that an Indian patient with a drug-resistant version of tuberculosis carried the infection to Chicago. The patient drove from there to visit relatives in Tennessee and Missouri. With diasporic Indians in nearly every part of the world, what ails India could easily become a grave threat to global health.

Loading…
Please enable JavaScript for this site to function properly.